Toffee apples. More American traditions that I’ve seen of and heard of on TV but never got to experience in real life. There was that one time a family friend of mine tried to make these at home but the result was a really hard shell of sickly sweet caramel which would crack with each bite of a soggy green apple. Americans are crazy I thought. You can see why I may have been somewhat hesitant about going somewhere which specialised in something which I initially thought I didn’t like. So I waited it out until social media started spitting out some pretty favourable reviews. And at this point it was Halloween which seemed as good a time as any to get sweet treats. 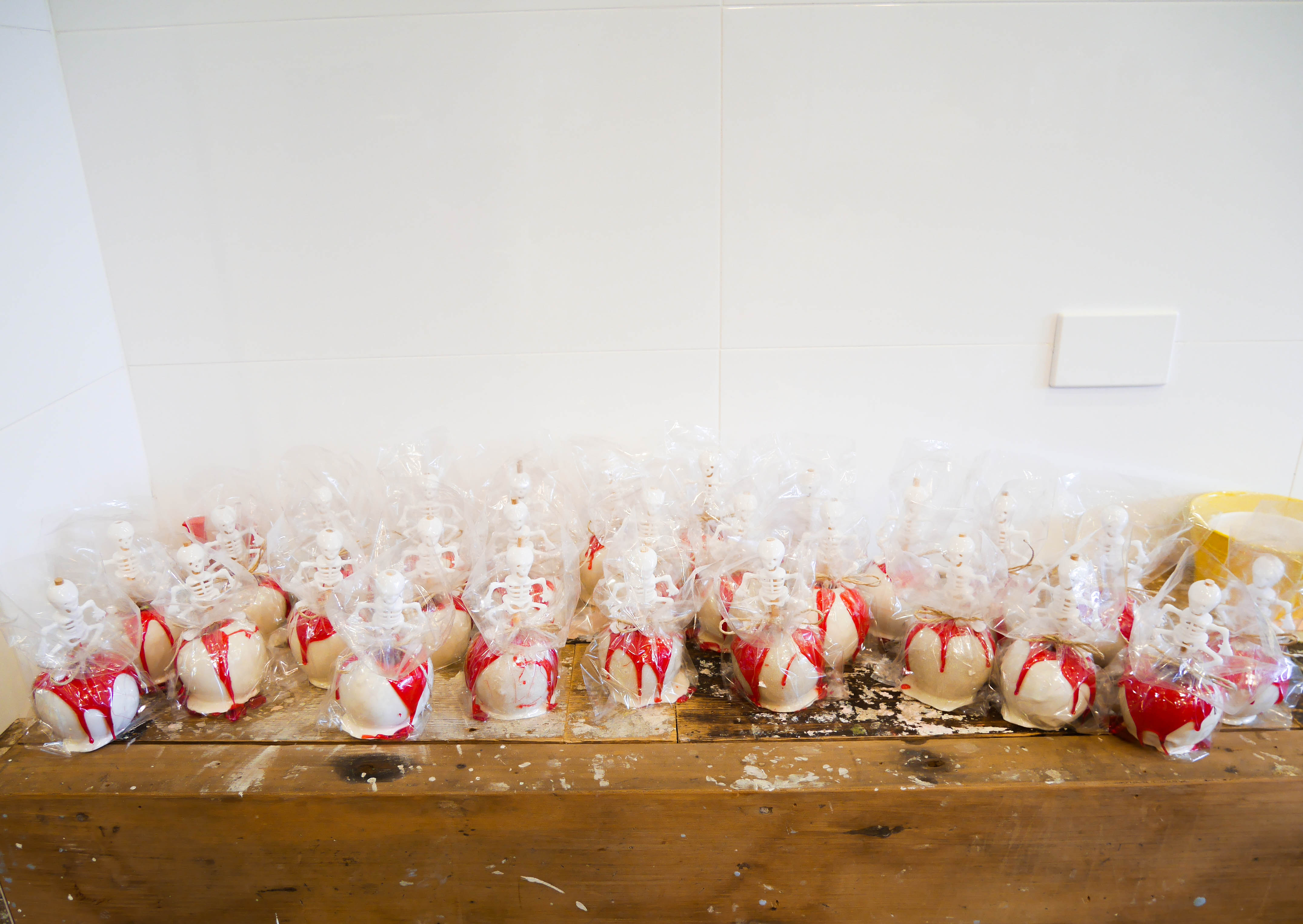 Beth is running a little bit late but I don’t mind too much as it gives me time to take some photos. The owners tell us that Halloween is (unsurprisingly) a busy period for them. Everything in store is decorated with spiders and skeletons, severed hands and eyeballs. The apples too are even more over the top novelty than they’d usually be.

When Beth arrives it is time to order. The menu categorises the apples into Classic ($8), Royal ($10), and Limited Edition ($13). Every apple is a crisp, green apple coated in Love Dem Applez’s house made silky caramel, the price discrepancy is in how crazy your toppings are . I end up getting a Tim Tam ($10) which is well, self-explanatory, while Beth gets an Apple Pie ($13) which has crushed cinnamon biscuits and Belgian white chocolate.

You can keep them whole or ask for the apples to be sliced into nine pieces. Unless you are taking these home, there is no real reason why you wouldn’t get them sliced because they would have been quite difficult to eat otherwise. 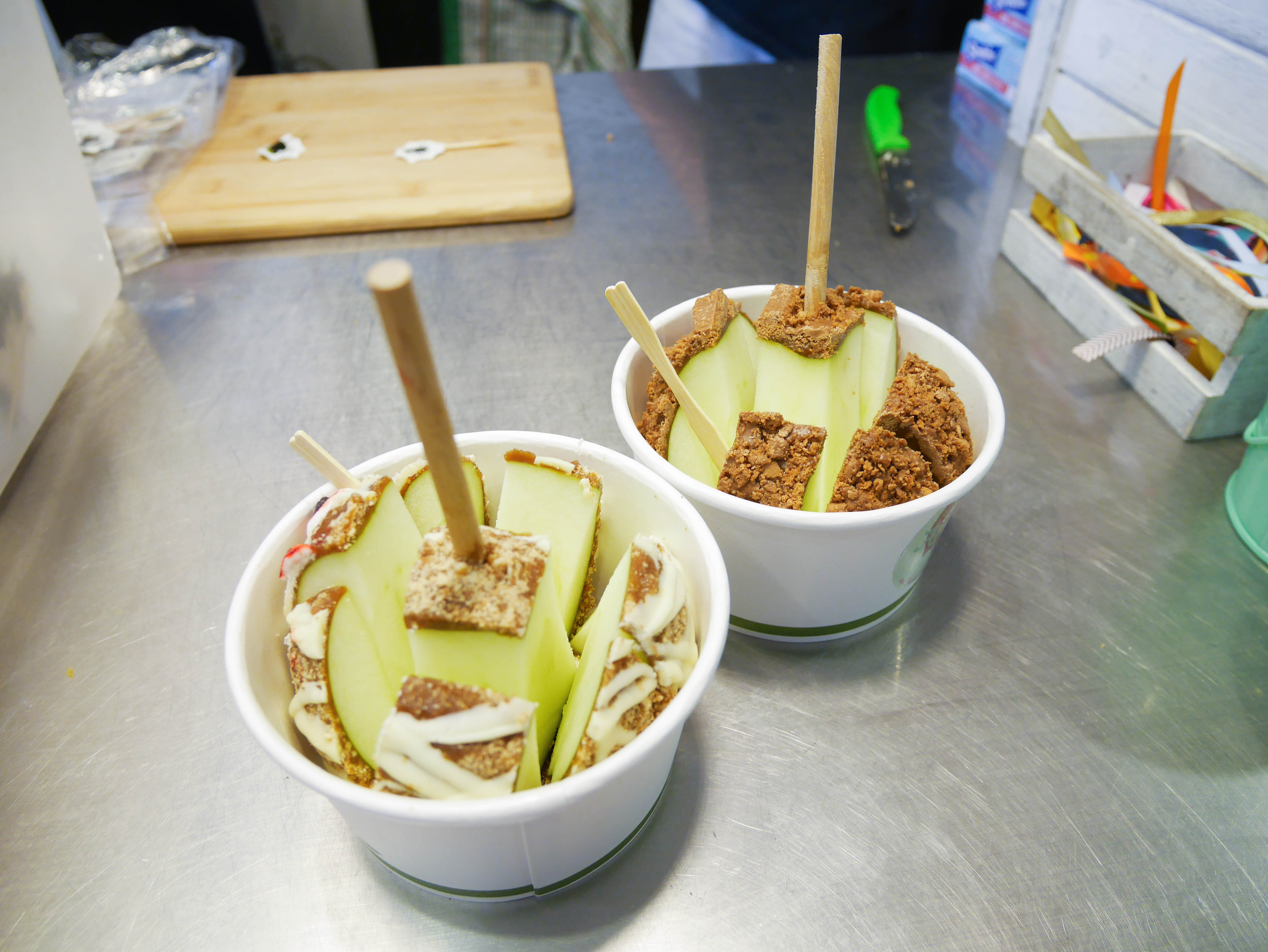 The flavour of my apple ended up  being a little bit overwhelming with the sweetness but hey what did I expect when I had ordered something with caramel and Tim Tam? Beth’s was a little more forgiving as there were only bursts of sugar when you bit into a particularly large piece of white chocolate. The apples themselves were perfect, crisp and tart and managed to offset most of the rich flavours in our toppings.

There are other menu offerings such as these cups of popcorn coated in chocolate. There is also a freezer at the back which stocks frozen bananas coated in a variety of other sweets like Oreo, chocolate and Tim Tam.

Love Dem Applez has really reined in the Halloween spirit, the interior is so festive. The only thing missing is a trap door or the ghost of green apples to balance out the treat to trick ratio. 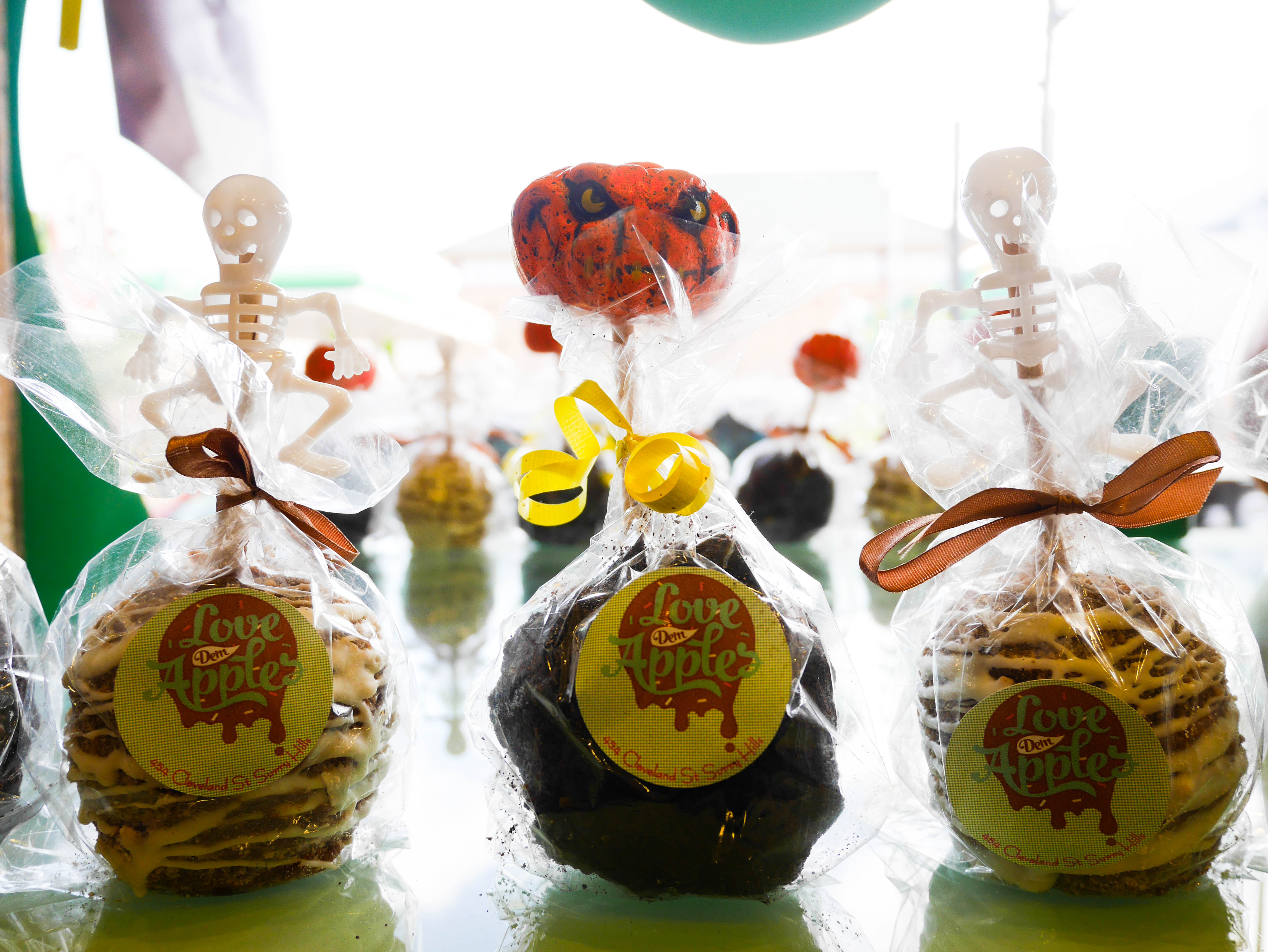 I’m not sure if I would come back to Love Dem Applez because $8 – $13 is a really hefty price to pay for apples. The craftsmanship to each apple is undeniable and they are definitely very tasty. But if I ever have a hankering for dessert there are probably other avenues to satisfy a craving besides toffee apples situated a little bit out of the way from my usual Sydney haunts. It is probably just me though, a huge kudos to these guys for figuring out a niche in Sydney amidst the numerous macaron/cupcake/cronut stores. If you’re very much a dessert person, I would highly recommend coming to try something different.