I’ve only mentioned living in Sweden about ten million times on this blog now so I’m not going to bore you with more nostalgic writings other than to say, food was a big part of it. I rarely ate out, living in one of the most expensive cities in the world on meagre student dollars will do that to you. But eating food at home alone by myself had it’s own charm, as did eating with my corridor mates and cooking meals with the outer friendship circle. Cue Edition Coffee Roasters walking into my Instagram feed touting its Japanese-Nordic swag food – the physical embodiment of my two favourite cultures in the world. Not forgetting that they’re peddling some of the most visually arresting platings of food I’ve ever seen, but I’ll let the pictures do the talking for that one. Is it a surprise then that in a fit of desperation to quell my incessant whining, Robert suggests we YOLO and make for Edition at the godforsaken hour of 7 in the morning?Japanese, something like Sweden, prettiness and food, I’m not even sure when exactly you had me Edition, but it was hook, line and sinker. 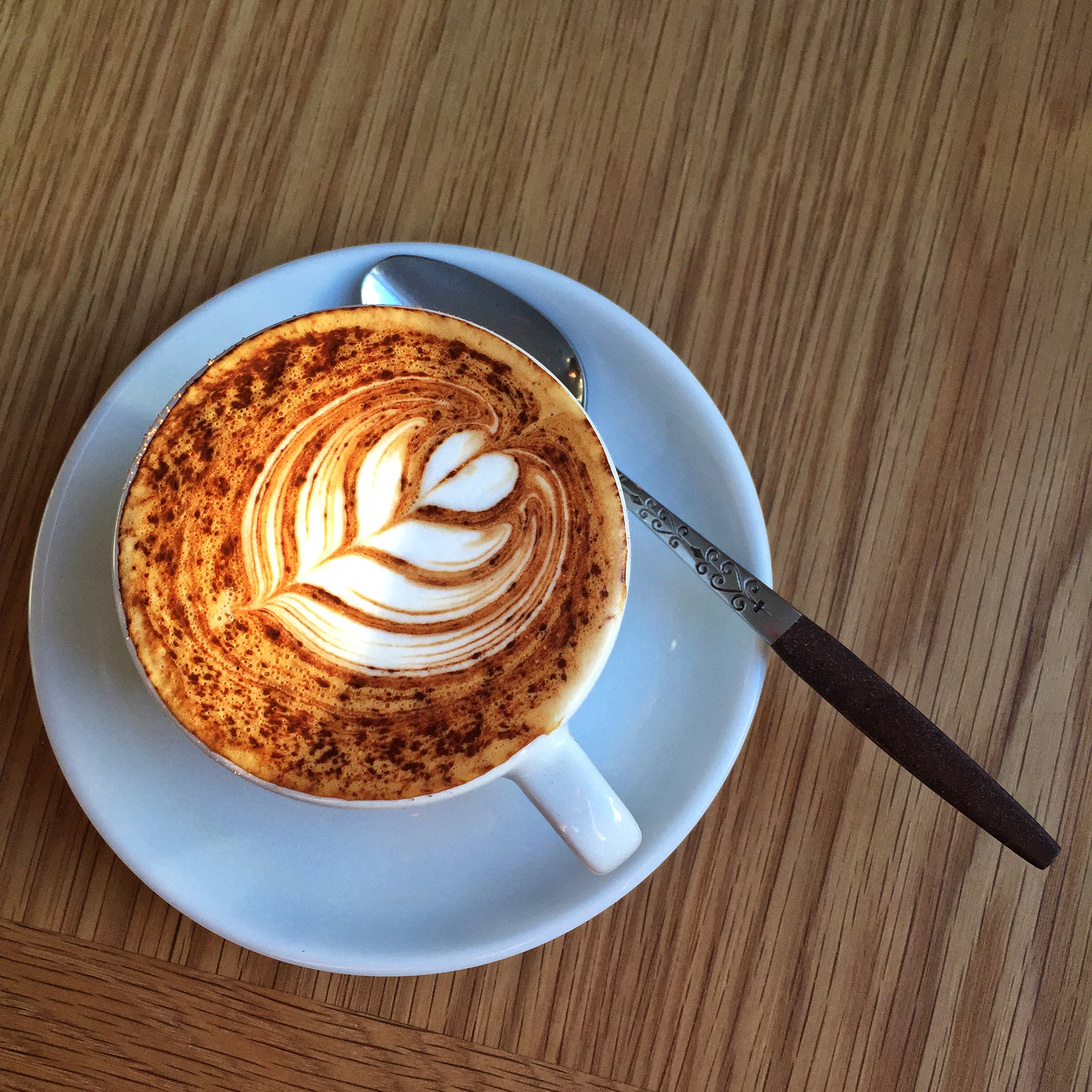 I don’t have a photo of the menu but it is an extensive list of coffee and tea. So much that the coffee noob I am wasn’t quite sure where to begin so I stuck with my basic skim cap. For whatever my opinion is worth with coffee, Edition’s is seriously damn good.

Adventurous Robert gets the Japanese drip. I was already developing stronger than usual feelings for my cap but the aroma coming from his was intoxicating. Almost a little bit disconcerting considering how light the drip was. Super refreshing and definitely helped with how hot and humid Edition is in the summer.

Daniel, one half of the Edition brothers jokes (but seriously) that this is probably their most Instagrammed dish at the moment. I heard mixed reviews about it but having already had a gander at some pretty pictures of it, I knew what to expect and I also knew why the naysayers were naysaying. No one in their right mind would say no to a big pile of house smoked king salmon, a stock standard crowd pleaser at least in these parts. The curls of pickle, carrot and daikon aren’t just for show, they help balance out the richness of the fish and add a little bit of tang to the overall dish. The problem I believe lies in rågbröd, the dense, sometimes dry, sometimes sour rye bread common in open sandwiches in Sweden. I get you Sydney, this is an acquired taste, after all it’s the furthest thing possible from our well coveted crusty and pillowy on the inside sourdough bread. But as far as I know (and I was in Sweden not Denmark) rågbröd is true Nordic fair and a substitution would be going against the grain of what they’re trying to achieve with Edition. Sticking with regular breads like sourdough would also turn the dish into something every, single, preexisting cafe in Sydney already offers. This dish takes me back to a ridiculous scramble to fotografiska with Phil Wong, one sleep deprived, one hungover, and one ridiculously good open sandwich. Probably the best I had in six months of Sweden. 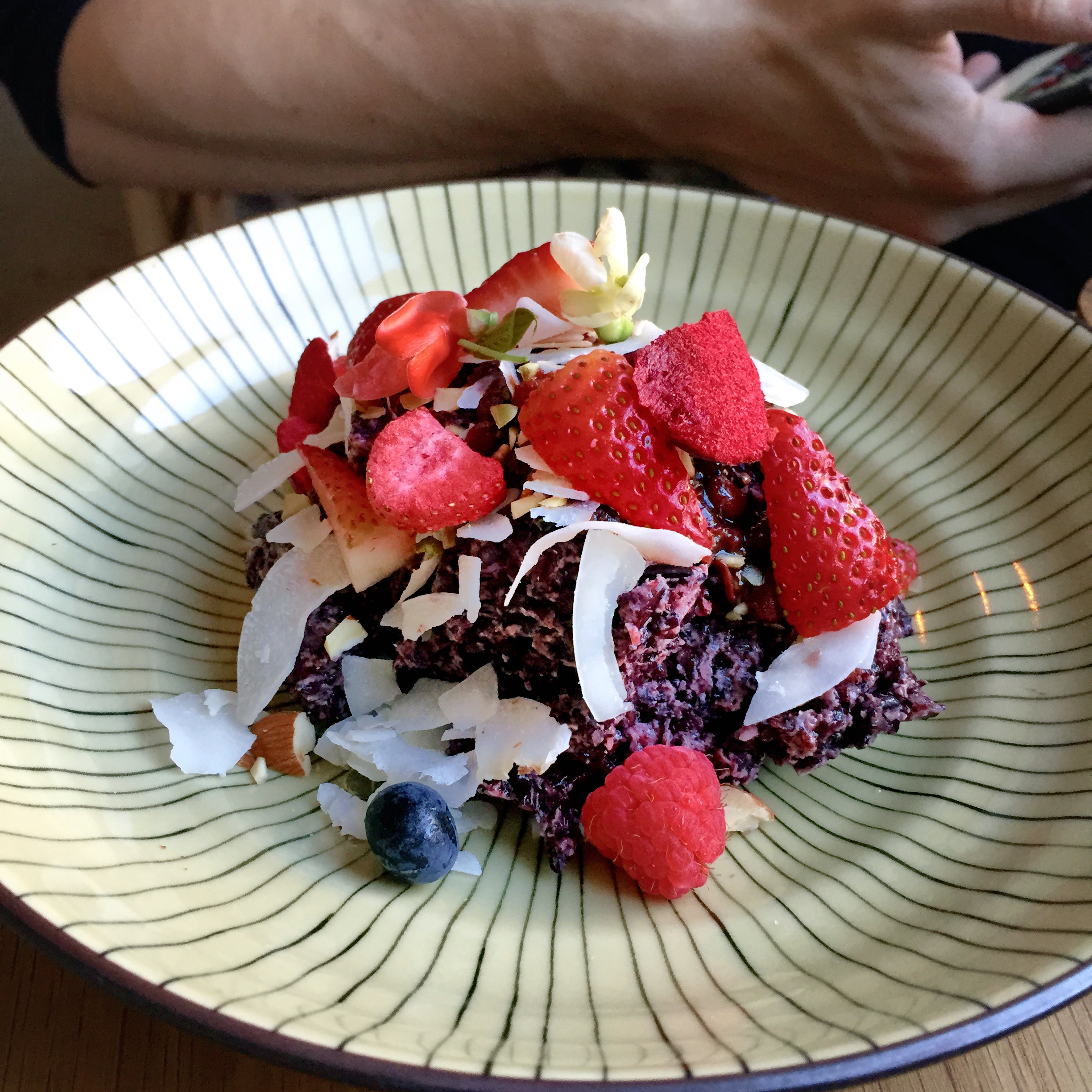 To give you the down-low on what exactly is going on, on this plate, it’s a heavy heaving of coconut yogurt mixed with black rice and other grains, azuki beans, dried coconut slivers and a mixture of fresh and freeze-dried berries. Add a couple of flowers because Edition is just a little bit into you. Robert ordering the black rice initially had me sulking for a few minutes as I have issues with anything that has a strong coconut taste. But having been all ‘the wilderness must be explored kaw kaw rawr’ at 1 am the night before, I begrudgingly had about half a mouthful. It’s not bad, and all personal biases considered, that’s pretty damn good. If you’re into something a little fruity yet still quite dense, this is probably the dish for you.

The pastry display had been empty throughout our entire dining experience but just as we’re about to pay, freshly baked Danish pastries are brought out. Robert can’t resist so I do what I do best and enable him to order the umeboshi Danish aka Japanese salt plums. Imagine the perfect sweet and sour combo sitting in one of the most delicious custards you’ve ever had, encased in infinite flakiness. If we hadn’t already eaten, I would’ve fought Robert for this.

The Nordic countries and Japan might be geographically far away but their cuisines unite easily like long lost siblings. Honestly my only question is why didn’t anyone else think of this sooner? There’s a gap in the market here in Sydney for some Scandi cuisine and tossing it together with everyone’s favourite Japanese food is genius. Edition has caught on to something that really just works. It might not be a big breakfast with a side of bacon or poached eggs on toast but isn’t everyone tired of that already?